This most cogent expression of obfuscation by one of our film heroines (I guess?!)— Paige Pritchard of The Poltergeist of Borley Forest (2015)— gives proper wording to so many of my feelings about so many things: COVID-19. Jell-O salad. That one scene in Brave New World. The changing shape of one of my moles. And the looming sense that an eight-year-old theater kid, very high on sugar and parental affirmation, wrote the dialogue for this film.

It’s all just so freaky! FREAKY, I tell you!

But surely none of my moles could be quite as freaky or distressing as trying to write something— a paragraph, anything!— eloquently linking together the aforementioned film and The Shallows (2016), directed by Jaume Collet-Serra. The latter is about Blake Lively battling it out with a shark while stranded on the shallows of a Mexican beach in her swimsuit. Much divine providence and hot-girl power ensues. The former is about … I’m not sure, I had to watch twice (and someone should pay me for that, even if it was mostly because I fell asleep the first time). But I can’t place blame squarely on the artists. After all, the difference between a Blake Lively budget and a buried-in-the-depths-of-Amazon-Prime’s-suggestion-list budget is significant.

But there at least should’ve been room in the Borley budget to teach the actors (or anyone in production for that matter) that “caprese” is pronounced ‘kuh-PREI-zei’, not ‘kuh-PREESE’. My head nearly did a Regan MacNeil.

The Poltergeist of Borley Forest— originally titled You Will Love Me, but given a name change to capitalize on the buzz of the new Poltergeist in 2015— is about a young woman being stalked by a ghost (or something like that— the special effects had me questioning my lens prescription) after visiting the supposedly haunted Borley forest for a night of partying. She and her friends— along with the most astoundingly cringeworthy portrayal of a professor I’ve ever seen— attempt to solve the mystery of the creepy Borley forest entity, which turns out to be twin ghosts. And of course, one is good and one is evil. And of course, the evil one carries a sickle.

There’s a slightly unappetizing romantic element that seems to be an attempt to throw off the audience, but while it’s ultimately proven that Paige’s older-guy admirer— Cooper— is not also her stalker, the fact that the movie plays the angle for a bit is just… weird. Nah, he’s not our stalker— he’s just an innocent, run-of-the-mill older-guy creep that ends up getting a raw deal. Paige is in high school and Cooper’s several years older, but he likes to sneak up on her from behind and call her “angel”, and pursue her with words like, “I don’t see you as this stereotypical, sullen, flower- and daisy-picking, drawing teenager. I feel like there’s more to you…”, or “You know the difference between being stalked and being wooed, right?” And we’re supposed to feel sympathy for this person?

At least our shark in The Shallows is straightforward about his business as a predator. But I digress. Or do I?! 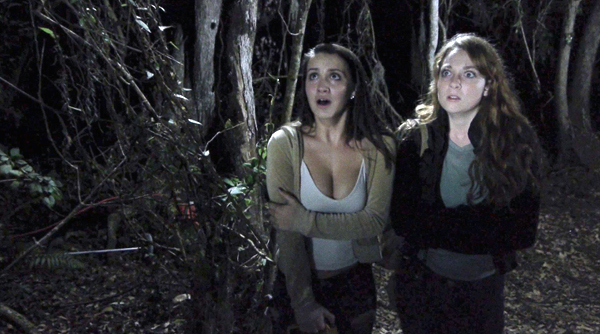 And it finally dawned upon me— as so many things do with enough Trader Joe’s dark chocolate peanut butter cups and just a touch of rosé, the life fuel of all basic women— that this is precisely what both of our heroines learn in these two films, along with every Ellen Ripley, every Laurie Strode, every Sarah Connor, and every other “last girl” that has to learn the hard way while running around screaming and half-naked: Predators! They are everywhere. Everywhere! In the forest. At the beach. In space. In the suburbs. In the future. In the wise, wise words of Paige Pritchard’s brother, “Everywhere is creepy.” Hard relate!

Girl goes to the local forest— an apparently little-known site but with historical purpose that includes Indian burial ground (had to, poltergeist and all that), Civil War battleground (wait, no one knows about this place?), site for the Underground Railroad (only the parapsychology professor from nonexistent Madeira Beach University knows about this place?), and home to a 1940s Satanic cult (I give up)— and subsequently gets terrorized by twin ghosts. Boom! You should’ve done your research, because predators— they’re everywhere.

In The Shallows, girl goes to a secret, unnamed Mexican beach to surf by herself and winds up nearly dead and stitching herself together with her own jewelry. Boom! What’d I tell ya. Precaution was not taken and now there are bodies in the water and predators afoot. A-fin? I don’t know. Ask the rosé.

But wow, I mean, do these people not do their preliminary research? Consult a local or two! As an enneagram six— I told you I was basic— how can you not assess the risks or anticipate every outcome or comb the landscape for potential threats? The world as we know it is perilous enough, but haunted forests for a night of partying? Off-the-radar beaches? In a foreign country? What folly! And it wasn’t nearly worth it for the former- that “party” in the forest is what I imagine my brain looks like when I’m very depressed: a red Solo cup or two, a dying campfire, kids weirdly making out in front of everyone (who makes out right by the campfire?!), and what sounded like Marilyn Manson’s first foray into muzak.

And with that final drop of rosé, I am compelled to ask our most pressing, illuminating, deeply pastoral question for the Christian soul: What Borley forests, what shallows, what Marilyn Manson muzak parties do you continue to foolishly visit in your heart? What unseen predators continue to lure you into their clutches? What lusts, what dangers, what temptations continue to entice you, only to be met with the devastating ramifications of spiritual twin-ghost-harassment? Or existential coral reefs of doom? 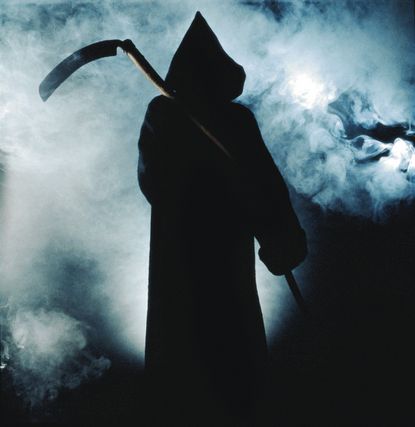 I implore you, dear reader, that despite what you’ve heard, we indeed must fear the reaper lest we be metaphorically bisected by a shark in a place without cell service or written off to die in a B-movie (that one I mean literally). Though I’m not sure this was a B-movie. More like a student movie, or like something I would make. Wait, did I make this movie? Good night.

Does beauty at thebrightblush.com. Does movies at grindhousetheology.wordpress.com. Does hot Cheetos all the time, anywhere. View all posts by McKennaRishmawy